Wild turkey out of the bottle 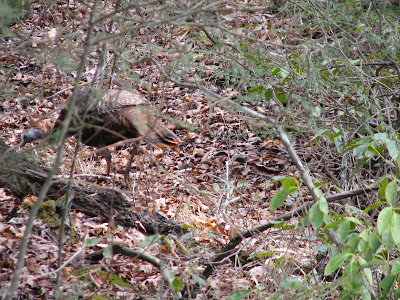 I almost ran over this fellow when coming to work two weeks ago. He was with a bunch of other turkeys trying to find their way to Cleveland County, where they planned on harassing the residents and teasing ignorant cats on Country Club Road.

I was hoping they would take to the air, for they are graceful in flight, they merely ran off into the woods to hide. 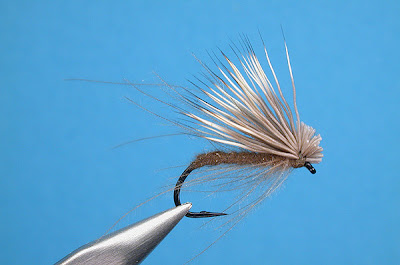 This CDC and elk hair dry fly is rapidly becoming my favorite go-to fly for mountain trout. I found it on a blog not long ago, tied up some and went out to the French Broad River and slayed 'em two Sundays in a row. The fly was fashioned by Hans Weilenmann of the Netherlands. You can find the instructions and more flies by Hans at www.danica.com/
The really neat thing about the fly is that you use only two bits of material, one CDC feather and a small clump of elk or deer hair and there are only two steps to tie it.
And, here's the kicker, you can fish it part of the float as a dry and then give it a little jerk to pull it under the water and fish it as a wet fly emerger.
Posted by Hugh Koontz at 7:23 PM No comments: 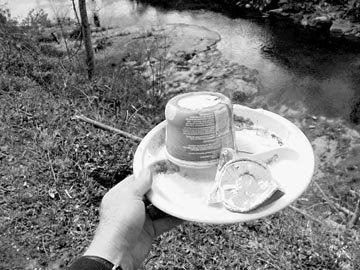 Earth Day 2008 came and went, but not without some wild thoughts and strong language around the Koontz cabin in the mountains of Transylvania County. I had just watched a short, 5-minute

YouTube video that got me all worked up about saving the planet.

What? New Zealand has lost 90 percent of its wetlands? Ouch. They have some fine brown trout fishing down there.

What? By the year 2030 Glacier National Park will have no ... glaciers.

What? Our coral reefs, home to 60 percent of the world's fish stocks, could be 60 percent lost in just 30 years.

What? By the end of this century, one-third of all species on the planet could be extinct.

What? In the time it took me to watch the video, 57 hectares of rainforest disappeared from Earth.

I got so fired up I went outside to try and save at least a portion of the planet but only got as far as the other side of the road, where I found trash tossed along the bank of my favorite river, The French Broad.

Then, I went fishing. One never knows how much longer the trout will survive.
Posted by Hugh Koontz at 9:52 PM No comments: