Fly fishing in the Tunnel of Doom 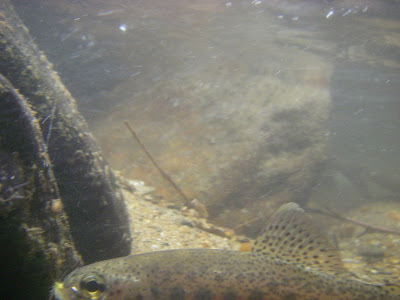 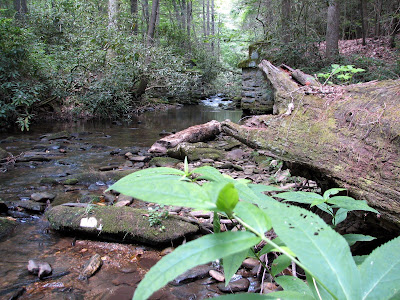 The sky was alive with dancing, happy clouds. Gone were those huge puffy piles that turned angry black in the late afternoon.
With the lawn mower broken, it seemed a perfect time to return to Avery Creek, where I had fished about 10 years ago. It’s a nice little stream, full of little native rainbows. It empties into the Davidson River, which is invariably crowded this time of year, and there are campsites and a horse stable, so weekends are to be avoided.
I chose Monday. Most of the campers had gone back to the city. Only a few vehicles dotted the sides of the dirt road.
Now, a good portion of the creek is wide open, perfect for casting a dry fly 30 or 40 feet without some dumb bush grabbing your fly on the backcast.
The trout are willing but not easy, for they are quicker than a New York second. And an angler has to be sneaky. These guys spook like squirrels in traffic.
With a yellow caddis dry fly, I managed to catch some little rainbows, one the size of my little finger, in a section near the horse stable, then moved on downstream to where the sun drenched the banks.
Along this stretch, you can’t see the water from the road because of all the vegetation, which made it all the more interesting. I had to try it. With all that bushiness, there had to be some shady holes with trout of substantial size.
That’s the theory, anyway.
My decision proved a wise one at first. I caught a couple trout, moving slowly and quietly upstream, hidden by overhanging laurel and rhododendron.
The water was low, but I found some puddles deep enough to hold trout, and they eagerly splashed at the now-ragged fly. I missed more than I caught.
It was tough wading, but fun anyway.
Then the creek began to narrow to the width of a sidewalk.
The limbs hung lower and heavier. I was on my hands and knees, crawling in the low water, dodging limbs. There was nowhere to walk on the bank, so I was caught in a green tunnel of doom.
"Would I be able to get out of there," I thought. Upstream, the laurel thickened. My hat got knocked into the water. I slipped on a rock. Bugs ate my face.
Boy, was I having fun.
My mind drifted back about 15 years when I first heard the story of Casius the Bull, who many years ago got his horns caught in the rhododendron. He never got out. They named the town after him, and called it Cashiers. Go figure.
Would I ever emerge? Or would they find my cold, dead body next week? And name a town after me?
The limbs seemed like thick snakes stretching across the creek trying to wrap around me and squeeze the life out.
Regaining my composure, I noticed light at the end of the tunnel . Breathing harder than a fly fisher should, I stumbled up the bank as the berry bushes clawed more blood from my arms and face.
The Troutmobile never looked so inviting.
Catching my breath in the car, I thought about the deep, shady pools I had stumbled through.
I feel lucky to have survived.
So, I’ll go back today. 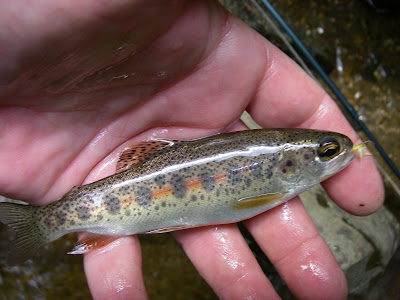 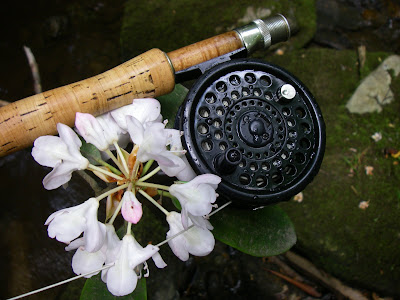 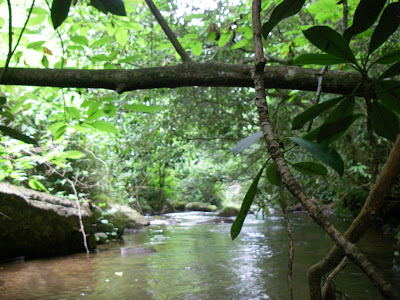 Well, it was moonwalk day, so I took off for a little adventure myself, heading for little Avery Creek, which flows into the Davidson, and tossing little yellow dry flies to quick-as-a-wink wild native rainbow trout.
They were willing, sort of, but I kept missing.
There were portions of the creek where the water opened up like a two lane highway, then it narrowed to a sidewalk-width trickle covered with dense vegetation.
I had been catching, and missing, a whole lot of little natives when I decided a sunny-looking stretch, which was hidden from view from the road because of the bushes. It turned out to be a tunnel of green, so thick I had to crawl on my hands and knees in parts.
The rhododendron hit me in the head, knocked off my hat and had me worrying if its grasping limbs would ever allow me to return to the car.
Still, a puddle here, a puddle there, and I caught fish.
If I didn't get a hit, or if I missed one, I just moved on to the next puddle or pool.
I caught a lot of tree limbs, sticks and grass.
And my fly survived, though a bit ragged for the wear.
I huffed out, following the light at the end of the tunnel, to the car.
I heaved a big sigh of relief. LIfe is grand.

Posted by Hugh Koontz at 9:18 PM No comments: 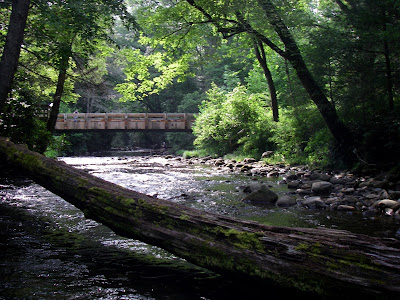 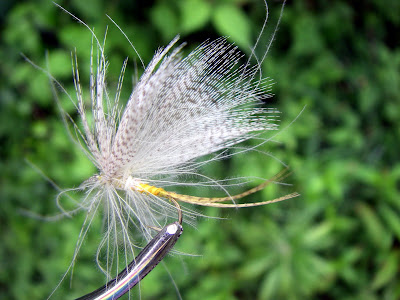 It was a pretty day on the Davidson River and the fly I had tied the previous night was also pretty.

But it did not catch trout. In fact, I never got a hit until just before dark and then all hell broke loose with fish rising all around me and then the tippet snapped. Dang. And too dark to tie another fly on.

I'll use the ugly fly.

It takes two to tangle 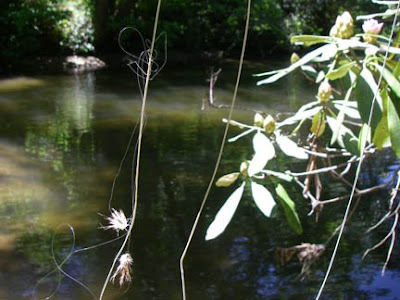 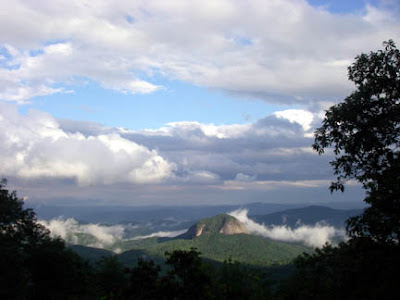 Driving on the Blue Ridge Parkway feels a lot like riding giant green waves, rolling and dipping in and out of the clouds, and I invariably waste way too much time stopping to gawk at the beauty of our mountains. It’s the only place I know where clouds also come out of the ground, not just from above.
I was thinking they ought to call these hills the Great Cloudy Mountains.
Kinda catchy, ain’t it? Think the tourism department would be interested?
If those hills were not so pretty, I could have spent a lot more time fly fishing for trout, but I wasted all that valuable fishing time (VFT) stopping for photos and drinking in the views that go forever into the mists. By the time I arrived on the home creek, the sun was dipping behind the mountain and thunderclouds hung threateningly overhead. I had to hurry to beat the storm.
I fished a big yellow fly I had tied the night before with a biot body and huge gray wings fashioned form mallard feathers. It looked pretty in the vise. How could any trout resist gobbling this marvel? I expected to catch a ton of fish with my new invention.
I didn’t. I got nary a splash from the not-so-hungry fish.
The huge wings made the fly a little cumbersome to cast, and it didn’t always land where I wanted it to, but it did sit pretty on the water, like a little pirate ship with full sails puffed out with a stiff breeze.
But it did not catch fish.
So, I switched to my old summer standby, the little yellow stonefly.
It, also, did not catch fish.
What on earth was gong on here? Darkness began to creep in on me like a black tide, and I began to hurry my casts.
Earlier, I had rushed my casts and hung up on a laurel branch. When I reached for the flies, I discovered a mess more tangled than a Jerry Springer story, and I almost had to give up on the muddler minnow and caddis fly and leave them for early Christmas decorations. That rig didn’t catch any fish, either.
Now, with darkness falling like a huge, black curtain, I started to catch trout with the stonefly. One, two, three, four … bam, bam, bam, bam. I was locking into fish almost with every cast now, though all were little rainbows.
Boy, the trout turned on right at 8:50 p.m. One brown trout hit the fly, then a good-sized rainbow.
Then, a really big trout nailed the fly, shook its head violently and snapped my tippet.
Trout continued to splash and jump, and all I could do was watch as the day melted into night.
By the time I could tie on another fly, it was time to go. A bright moon painted a silver edge around the clouds, which opened just enough for it to shine on the river’s surface.
In all, though, not a bad day.
Posted by Hugh Koontz at 6:50 PM No comments:

Remembering those big trout from the past 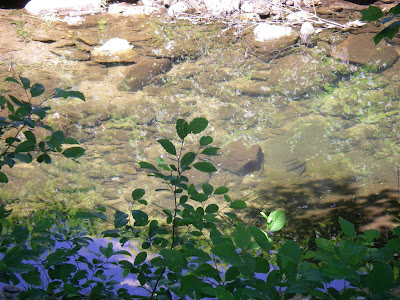 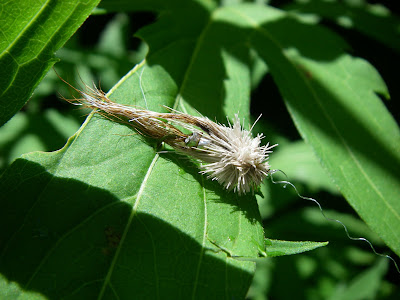 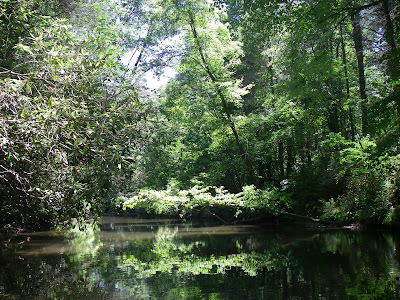 I was cooking by the creek as the sun was waning when a shadowy figure emerged like a phantom from the laurel. He had on a wide-brim hat, light waders, nice boots and what I can only guess was a pretty expensive flyrod in his hand. At least, there was no duct tape holding it together. His vest was perfect. No stains, so he must have just bought it. Though I had never seen him before, he turned out to be a neighbor who had lived in that neck of the Pisgah National Forest 53 years.
He admitted catching just a few small fish before he quit. Nothing big. Nothing to write home about.
We sat by the fire, adding twigs to keep the flames alive.
I had quit fishing earlier in the day and was having my own private cookout by Courthouse Creek. Surprisingly, there were not that many tourists camping and hiking. As the sun dropped behind the hills, a comforting quiet filled the air, with just the song of water splashing over smooth rocks.
We told fish tales for awhile, recalling the days when huge trout fought at the end of our lines, not even realizing how much those long-ago fish had grown.
I told him about the big brown that had hit my caddis fly seven years ago, right there under that bridge just up the dirt road. And, there was the one at the church road bridge that nailed a slow-floating light cahill, and a couple of others that I had landed using a Tellico nymph with enough lead to sink it to the bottom of the shady pool downstream from the bridge.
And I admitted I had not caught a big one all year, and here it was half over. I had been fishing a tandem rig, with a muddler minnow tied to the hook bend of a small caddis dry fly. The idea is to fool the trout into believing a baitfish is chasing a small emerging fly and slam into the muddler, and it often works just like that with a big, head-shaking brown nearly tearing the rod from your hands.
An angler never forgets such fish.
We even remember the ones that broke off, like the one I lost on the Smith River in Virginia about, uh, a quarter century ago. He flashed all gold and silver in a late afternoon sun, leaping from his hiding place behind a log, and snapped that tipet as if it were a spider web. I remember my knees shaking from the excitement and shock.
This weekend, I’ll again try for the monster browns with the muddler and anything else big in the flybox.
And, while sitting around the fire late in the day, I’ll have a fresh yarn to spin if another fisherman drifts in through the laurel.
Posted by Hugh Koontz at 9:37 PM 1 comment: