There should be some fine trout fishing weather this weekend in western North Carolina. The forecast is for some clouds and possible showers late in the day, about like summer around here. The sulphurs were coming off near the Davidson River bridge right at dusk but I had no luck in the 20 minutes it lasted. Perhaps my splashing around scared them.
This weekend, I am armed and dangerous, so wipe that smile off your soon-to-be-released face, brownie. 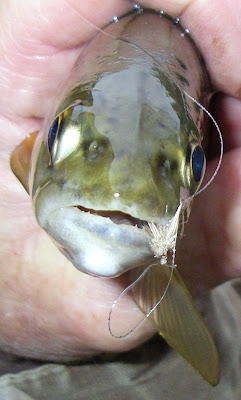 Fly fishing weather is back 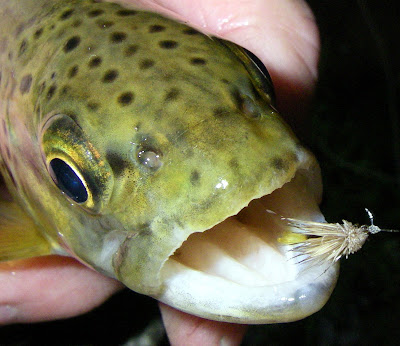 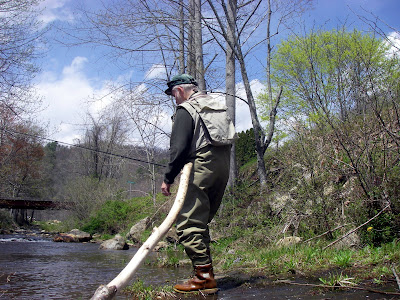 Well, it's been almost two weeks since I returned form an unsuccessful fishing trip to Va. Beach for some surf casting. For the record, I hooked not a single marlin.

Actually, the trip was for the 5-year-old's birthday and a visit with family. On my last day, I bought a $20 rod thick as my ankle and slung some heavy jigs into the surf with the wind and cold rain in my face. I thought it was going to sleet. How did it get into the 40s so quickly when it was nearly 80 just a day before.

I did managed to get back to the mountains last weekend. The browns really turned on late Sunday evening and the water was up and in a hurry after some heavy rain.
Posted by Hugh Koontz at 10:59 PM No comments: 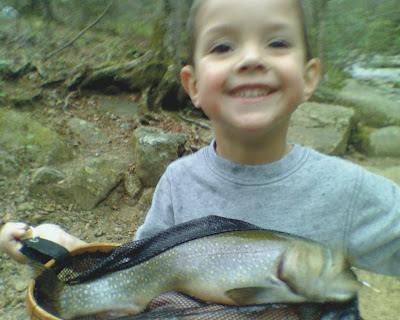 There are events in a man’s life that stick in the mind with crystal clear lucidity for a lifetime, moments to be recalled in pictures sharp as new televisions. There is the first day of school, the first real kiss from your first real girlfriend and, I am sure of this, your first fish caught with a rod and reel.
The first day of school, as I recall, was a dreadful affair, and the first real kiss from the first real girlfriend turned out to be the first real broken heart.
Really.
I never forgot any of those.
But the first fish I ever caught stands head and shoulders above all the rest, for there is nothing quite like being eight-years-old and wrestling with a wiggling fishing rod with something mysterious shaking at the other end and having no idea what kind of monster you may have hooked.Is it a shark?
My first fish, a little spot caught in the Elizabeth River in Virginia, was followed by a bagful of flopping silvery fish dancing on the grass. Mom cooked them, but only after I had gutted and cleaned each in the backyard, the only part of the experience I hated and one that eventually led to my catch and release practice today. The thrill is in the catching, not the cleaning, and you tend to waste way too much valuable fishing time (VFT) slitting fish bellies and lopping off heads.
Just toss ‘em back and keep casting.
I also vividly recall that first mountain trout. I caught that one, after several days of lashing the river with my new flyrod, in the Smith River near Martinsville, Va. It was in shallow riffles about 8 inches deep, close to the far bank near a furniture plant. The little rainbow hit a hare’s ear nymph. Boy, was that fun.
After that first taste of fly fishign success, I spent the next year fishing 229 out of 365 days.
I had turned into a fishing monster.
I fished before work. I fished at lunchtime and even in the evernings just before the city council held its meetings, prompting some witty remarks from the mayor about my wet clothes.
Well, little Carson Wince of Fallston caught his first fish this month on a rainy Good Friday in South Mountain State Park.
The three-year-old first-time angler caught the fish on a fly rod, too. On a wooly bugger, size 8 and black as a new Bible, also one of my favorite flies .
Carson’s trout was a big ole 16-inch brook trout.
Whew, that’s some fish.
His proud dad, Kenneth, sent us the photo of his son hold ng an obviously wiggling trout that was about as big as the grinning little boy.
I’m betting Carson will tell his fish story a hundred times or more during his life and, if he matures into a serious fly fisherman, the trout’s proportions promise to grow prodigiously with every passing year. Perhaps Carson and I will swap fishing lies one day.
Hey, I think that first trout I caught 24 years ago just grew a couple of inches.
It’s something that’s never forgotten, though often embellished.
Posted by Hugh Koontz at 4:22 PM No comments: