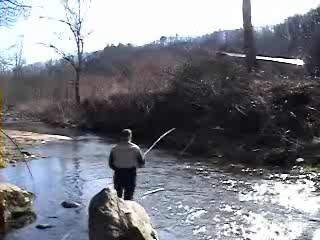 Click the image to watch video. Winter fly fishing can be a treat or a trick, depending on a lot of factors like the wind, cold, snow, ice, etc. I tried to get some of the neighborhood trout to cooperate but managed to break most of them off last weekend. I did, however, catch a few with a black marabou streamer I tied the previous night.
Posted by Hugh Koontz at 4:42 PM 1 comment: 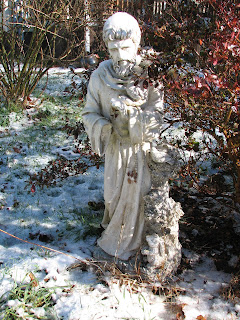 I was working Christmas Day, not dreaming of a white Christmas at all. I just wanted to finish up and drive back up the mountain to our cabin by the river. About 10 miles from home, I noticed that the light rain had change in consistency and my rear tires began to spin a little on Hwy. 64.

It got better. The road became white and the light drizzle became a pretty good snowstorm.

It was white knuckle driving all the way...10 very long and twisty miles ... up the mountain.

A little late for mos t folks up there, but I had about an hour of white Christmas. There was still some on the ground in the morning, enough to make it pretty.

I caught a bunch of trout and was having quite a time until Mrs. Koontz suggested I drive to town for her.

By nightfall, the snow was gone.

Posted by Hugh Koontz at 4:41 PM No comments: