May flowers and trout 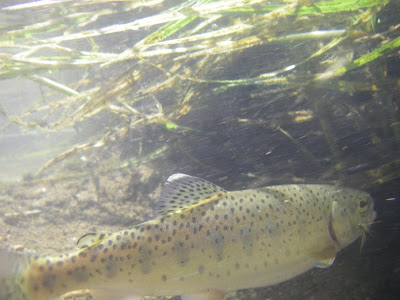 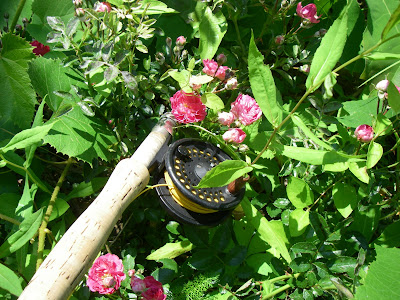 Wild rose and honeysuckle fill the air. Cold water flows around my legs and rainbow trout dance in the current, wiggling and swaying to some unheard music. I caught a few here and there in the afternoon. Hatch was coming off, but I could not get the fly right. Sorta yellow today, while last week it was an almost white fly hatching. Still, I caught a couple, switched to nymphs and got some more. All small, around 10 inches or so.
Sun was achingly bright, so I kept losing the little flies in the glare, only to be roused out of trance by a loud dog-in-the-water splash where a trout just rose.
A kingfisher flew low, putting down a few fish. Old man and his grandson crashed down the bank through the rose bramble. I let em play with those little fish and moved downstream,tossing a wet fly and catching more little guys. Where's that fat trout?
Later, i tried at the bridge with no luck at all. Then at the fire station things picked up when they settled for a no. 16 light cahill. They were all over it.
Just as I was ready to quit, a trout the size of my leg spashed heavily. He was entirely out of the water for a sun-drenched moment, all golden and shiny with an electric glow. I had to at least try for that one.
Well, I tried. And after catching another dozen average trout, I began to reel in, hard with a little anguish added, and just as I lifted the line off the water a trout hit.
Yep, another average rainbow.
My favorite color scheme, red and silver fish to go with red and white wild rose. Not average at all, I'd say.
It's pretty special actually.
What a nice Memorial Day.
Posted by Hugh Koontz at 9:23 PM 1 comment:

Memorial Day on a trout stream

On Memorial Day weekends, I drift back to Virginia Beach of 1967 and a summer night in a dimly-lit tavern. The thick fishy smell of the ocean is fresh in my mind, even aftrer four decades. I can hear crashing waves relentlessly pounding the sand flat. Boat lights blink and bob in the dark. I hear the big ships moan in the black night.
These thoughts return uninvited every year around this long weekend, when the nation pauses to grill boat, fish, golf, salute a parade or just take a holiday from work. The days whip by like tornadoes of eating, drinking and laughing amid a riot of music, motorboats, Harleys and boisterious teenaged boys.
Away from the riot, a few people will pay homage to the men and women who died in defense of our country. I'll remember, too, but I'll flee alone to a trout stream. There, it's always quiet. And I think that's just fitting.
Forty-four years ago, the noise was welcomed. It was July and, of course, it was pavement-shimmering hot. Johnny and I were sitting in The Ravern at Virginia Beach, drinking sweaty mugs full of ice-cold beer with our girlfriends. We looked like overcooked lobsters, our faces bight as stoplights, and we were having the time of our lives. We knew we would never die.
Johnny and I had been on the high school wrestling team at Maury High. He had wrestled heavyweights thick as cows, mostly. I wrestled the little guys, the lightweights. I think Johnny was more like 180; I was a soaking-wet 125 by the time my junior year rolled around. He was always overachieving and won a football scholarship to Tennessee when normal-sized people played. I, ever the underachiever, made fourth-string on the Virginia Tech wrestling team.
Once, at a high school dance, I discovered the mysteries of gin and was horribly surprised to find this stuff could make you sick. It also could kill you, but who worries about such when you're a teenager? We were indestructible. We knew we would never die.
Besides, Johnny was there to make me puke; probably kept me alive.
I had run into Johnny that summer night at The raven by accident. I hadn't seen him in a while, not since he took off for Marine Corps boot camp. He was just back, and I was getting ready to go.
Johnny was delighted at that bit of what I thought should have been considered sorrowful news. He spent a good portion of the evening scaring the red off my sunburn with horror tales of sadistic drill instructors who lived to beat on, yell at and torture Marine recruits. I'm convinced some were evil.
We didn't talk about world news that night. We certainly did not discuss Vietnam. We were not political. We were just two beer-swilling guys with their girlfriends in a Virginia Beach tavern talking about good times. What war? And who cared? We knew we would never die.
We left late, diving into the black, humid night, letting the ocean's breath wash over our stinging skin. We said our goodbyes and our good-lucks while fading into the night. I took off for Parris Island in a couple of days. Johnny took off for Vietnam. I remember his huge smile framed by all that redness. He had a great smile.
I never saw that smile again.
I never saw Johnny again.
Johnny was shot and killed in Nam by enemy fire in 1968,
So, now we have another Memorial Day for people who need reminders that war is, indeed, hell. In a day of video-game warfare, it's easy to become detached, or just plain not care, which I submit is far worse. If it's not on TV, it's not happening?
I don't need a reminder. Neither should you.
Even in a mountain trout stream, I can almost smell the ocean air and hear waves slapping the beach.
Semper fi.
Posted by Hugh Koontz at 8:44 PM 1 comment:

Now I know that spring is here. While sitting outside preparing to put my fly rod up for the day, one of these little yellow stoneflies whizzed by my ear. I caught him on a blade of grass, and he glady posed for several photos. After a few minutes wasting VFT (valuable fishing time), I crossed the road, scampered down the bank and began heaving flies every which way.
The little stones were hiding, I guess, so I caught a couple of rainbows with a pheasant tail nymph and kept on fishing downstream from the cabin.
The sun was fading quickly. Then the little yellow Sallies began to hatch in abundance, driving the trout crazy. The water began to boil with rising fish. I slashed at the water with my flyline - first here, then there, chasing rises before settling down to seriously catching fish.
Come Sunday, I'll be loaded with little yellow stones in the fly box. Around 8 o'clock, they'll begin popping like corn.
I used to sit on the banks watching other fishermen whip of a froth on the water's surface, fussing and cussing the fish they could not land. They usually left around 7:30 or so. Way too early. One must be patient.
At 8 it's great.
I live for this time of year. 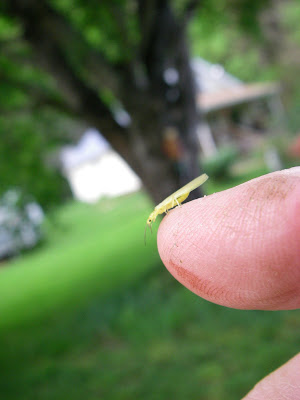