Fly fishing is all about timing 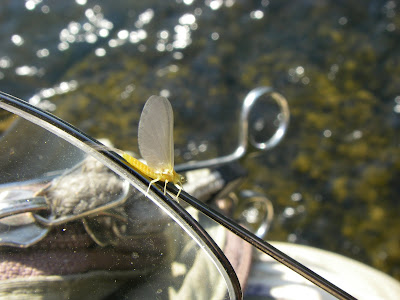 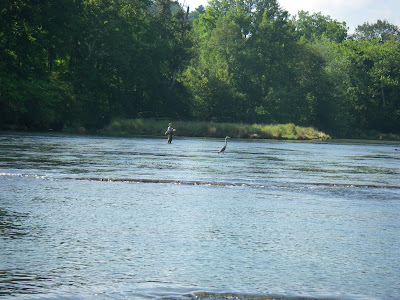 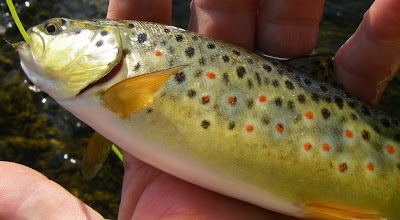 I had slept on the ground with the stars winking above, crashed inside the car during a rainstorm and found a cabin with air conditioning during my experiments with camping out near trout water.

Best of all, I spent a couple of nights on the banks of the South Holston River with a camper to sleep in and a stack of firewood to burn. I was so close to the water I could hear trout rising to eat little yellow bugs.

On the hottest day of summer, I selected the cabin as the best option. It remains so.

The riverbank site conjures the best memories. There, I would arise with the sun, check out the water, go eat breakfast at one of the two country stores, return to the site and fish until noon, eat lunch, then fish the early afternoon sulphur hatch until the water began to rise with roiling water released from the dam.

One day TVA did not generate, so the water stayed safely wadable.

The river itself is wide and open. I fished under mostly cerulean skies, rimmed with puffy clouds that reminded me of piles of popcorn.

I caught a ton of fish.

My most recent trip to the So Ho reminded me that in fishing, as often it is also in life, timing can be everything. You grill the local fly shop operators, tie the correct flies, arm yourself with a stout flyrod and use 25 years' of trout fishing experience to get out there and rip some lips.

None of that matters if the timing is off.

There had been a heavy rain the night before I arrived. The lower end of the river, the part I usually hit first before fishing near the dam, resembled cafe au lait from you favorite coffee house. I zoomed upstream, only to find every flyfisher from three states standing knee-deep in the river slinging flies into a vicious wind.

There was even a squadron of blue heron between the anglers.

I had to hike a bit to find an unoccupied stretch. The hatch was on, trout were rising here and there and everything was perfect ... except for that damn wind.

My timing was off. I should have arrived hours earlier. There probably was plenty of gusty wind then too, but I could have had my choice of places to fish. Although I didn't know it at the time I waded out from the bank, I picked the worst spot of all. It was scary wading, with some really deep dropoff punctuated with little ankle-breakers in the rock formation that made up the river bottom.

So, I could not wade far. And the different currents dragged my fly across the water like a berserk bass boat, scaring every fish in Tennessee with its wake. When I thought I had a good cast, that pesky wind would rev up and take my fly for a wild ride to someplace else.

I got a couple hookups, a few handshakes so to speak, but no fish. I skitted the fly over the surface and got some good rises, but missed them each time.

Two hours went by. No fish. The afternoon wore on. The wind wore me out.

I was on the verge of packing it in but thought, just one more cast, and I punched the fly upstream 25 feet into the gust. The water was a little choppy with the wind, so my sloppy cast didn't scare anything.

And a trout smacked that fly.

Another few minutes and I would have been out of there and that brown trout would not have a sore lip. 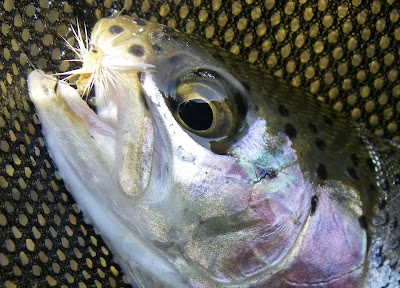 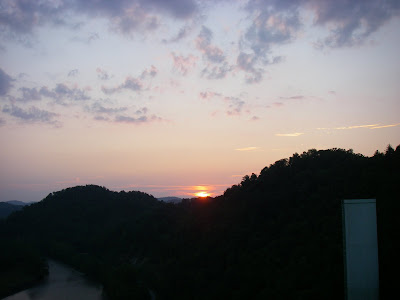 Found a cheap cabin to rent on the hottest Sunday of the year. Didn't catch many fish and missed the evening sulpher hatch because the TVA was generating and the water was scary high.
Thought I had the biggest trout of the year Sunday afternoon before the water came. Took about 5 minutes to horse him in. Quite a battle. For a little 12 inch rainbow. I had foul-hooked him in the tail, so he felt like a monster brown at the end of the line.
Nice trip, anyway.
Posted by Hugh Koontz at 10:13 PM 5 comments: 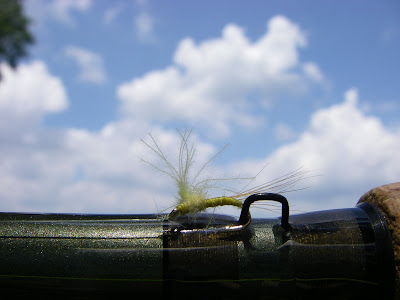 The black sky outside the camper window slowly faded like a pair of old jeans to a shade of gray. The rising sun added a bit of blush. An eerie mist shrouded the beasts mulling about in the field.
It was my third weekend camping, and the newest spot was nestled under a clump of shade trees beside the South Holston River in Tennessee.Unlike the other campsites I had tried, this one was wide open as the Serengetti in Tanzania, though the beasts that surrounded this site were mere beef cattle, not wild rhinos. And I was thankful for that, despite the plethora of flies that lent their incessant buzzing to the natural melodies of summer.
It was the flies that drove me inside the camper early in the night. I usually sleep with just the star-sprnkled sky for a roof. It it rains, I can fit the sleeping bag into the back of the Troutmobile, like I was forced to do the previous weekend.
In two and a half days I got in a lot of fly fishing, managing to catch tons of brown and rainbow trout. They were hitting little sulphur flies, little yellow things the fish seemed to like floating on top of the surface or below. I fished a CDC dry up and across, then let it swing downstream until it dipped under the surface. From there, I stripped the fly back slowly until I felt that familiar jerk at the other end.
Sunday evening was awesome. After a long lazy lunch, I rigged up the new rod. From my seat at the campsite, I could see rise rings spread over he mirrow-smooth water while the feeding trout taunted me. I could not turn away from such a challenge.
During the recent hot dry spell, trout have been stressing out. Warm water can be lethal to the fish, and many fishermen avoid low-altitude, and hence warmer, creeks and rivers. Instead, they search out trout in the higher elevations. Or they find a tailrace river, where the coldest of the cold water in a lake is released from the bottom of a dam to generate electricity and make a lot of trout downstream happy in July.
It is never dry on the South Holston. The water gets a bit rough when they open all the gates, but it's always a healthy cold temperature for trout.
I was catching a few and missing a few when a fellow in a big 'ol cowboy hat hollered from the bank. Names were exchanged; dinner invitations were offered.
The fellow, who has the same name as one of my first cousins, said they would cook the steaks around 6 and return to the water at 7 for the evening hatch.
Sounded like a plan. My luck was looking up.
And after dinner we slayed 'em, mostly with little yellow spinner flies, and fished until the biggest moon of the year peeked over the treeline upstream. Sparkling trout held in the glow of a midsummer moon left one of those indelible images forever etched in my brain. Who needs a camera?
The next day, there was a late-morning frenzy of hooking, catching and losing trout, almost all bulldog-strong browns. The fish returned for an encore later in the afternoon, just before the dam gates opened and the rowdy river chased us to shore.
I slept like the proverbial log that night to the tune of Carolina Chorus frogs and the river's steady beat.
The flies stayed outside.
And as I left, I recalled the campsite owner mentioning an empty home he would let me use, which would certainly protect me from bug attacks.
But I would miss the water buffalo wading throught the early morning mist, awash in a golden sun.
What's a few bugs?
Trout like bugs.
Posted by Hugh Koontz at 9:17 PM 3 comments: 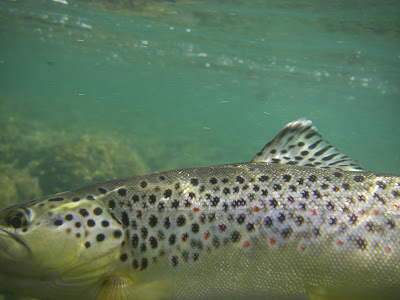 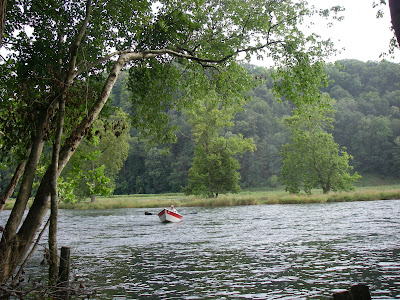 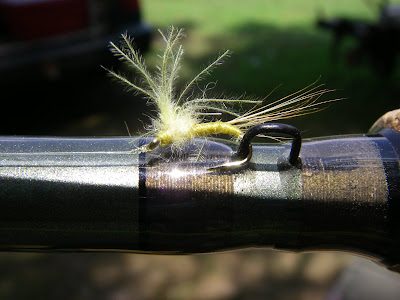 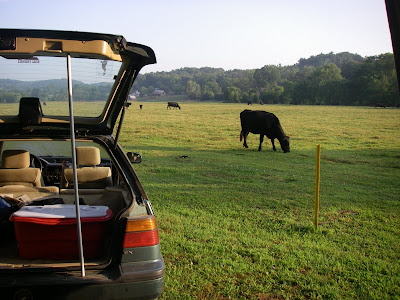