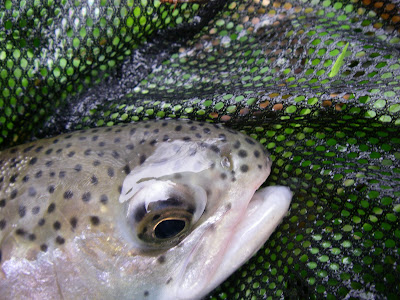 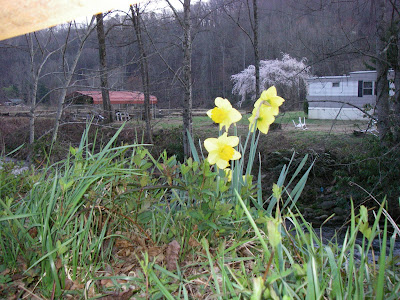 There was about 40 feet of line floating on the surface, and the fly began to swing across the middle of the stretch of river. Fishing Prince and pheasant tail nymphs on a glorious spring afternoon, I had caught a half dozen rainbow trout. Some jumped and fought. Some just wiggled a little, as if they knew I was going to toss them back. It was a fine day.
I began to strip in line - two strips quick, one slow, and so on - and was ready to call it a day. I had errands. Stuff. Bills to pay. You know.
And something huge tugged at the other end. As usual, I figured it was a log or moss-covered rock. I hated to lose that fly, especially since it had worked so well, but I was ready to snap it off and reel in when that log splashed and leaped, angrily tossing its head like a dog with a bone. I could see the flash of silver and bright reddish-orange sparkling in the sunlight and knew it was the biggest rainbow trout of the year.
I was not about to break him off. What a fish!
He was bigger than the big'un I nailed the previous week, one so fat that I could not fit both hands around. I cussed myself for leaving the net in the car, just to avoid a few rose bushes on the banks, and I knew a photo was out of the question.
At my feet, splashing and wiggling, the trout seemed to take one sardonic look at me before flipping the hook and scooting off.
Wow. That was fun. The miserable winter I had been assaulted with each day off since Thanksgiving abruptly stopped to allow a tardy new season in.
Now, the hills were again alive with color, as if somebody had spilled their Fruit Loops on Mount Hardy and allowed the colorful circles to roll down the slopes.
Jonquils kept a silent watch from the banks. Wild violets and bluebells swayed in the gusty spring breeze. Cherry and apple trees fill with blooms.
Spring had arrived and all was right with the world.
Quill Gordons have arrived for their annual visit, but I have managed to miss the peak hatches I heard about at the Davidson River Fly Shop - "Biggest hatch I've ever seen here," said the guide.
Yeah, I know. I shoulda been here last week.
Late Sunday I tied on a Quill Gordon, though I never saw any of the big bugs flying about that day, and tried it out on Avery Creek, a tiny tributary of the Davison River that regularly gets hammered. The fish are wild and small, but like most tiny creeks it's full of surprises. Within the past year, I have caught brook, rainbow and brown trout there.
The brown, hiding in the shade of some branches, took the Quill Gordon when I wasn't looking. Surprise!
I said it was a beautiful day. Anybody's mind could wander with the sun ripping through the hemlocks to dapple the water's surface.
It seemed as if spring had come in the back way, with hardly anybody noticing the color gently filling in the blank spaces on the mountain's canvas.
Now, it's here in all its glory.
Posted by Hugh Koontz at 8:37 PM 1 comment: