I find it difficult to accept that the original mountain men named this protuberance along Route 215 near Rosman "Gator Rock", for I cannot for the life of me see where the rock resembles an alligator, and besides, who ever saw an alligator in western North Carolina.????

I would have called it Plott Hound Rock, or Dinosaur Rock or Eagle Head Rock.

The more I look at it the more I see a laughing eagle.
He's probably laughing at the folks who named him Gator.

Anyway, it certainly was pretty last weekend riding through that tunnel of color into town. It's a great year for fall foliage.

Fly fishing was tough. Just one brown. Did snow some Tuesday morning. 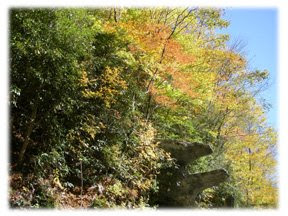 Only bright spot was the week before 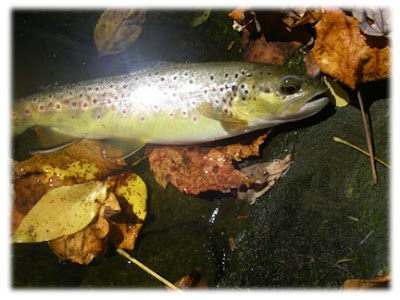 I would love to say that I tore 'em up last weekend, but the truth is I had only one real strike the entire day Monday and I slept most of the afternoon Sunday listening to the chatter of a tumbling creek. When I opened my eyes Sunday, it was dark. I went home without even wetting the line, though I did manage to rig up and tie on a little dry fly.

Monday, I voted. Cut some grass too. I also ran errands while in the tiny town of Brevard, knowing the fishing was not forecast to turn on until late in the afternoon.

The forecasters were correct - I never saw a rising trout until after 5 p.m.. And those trout, friends, were tough to entice.

For my trouble I got one 30-foot handshake, then lost the fish.

The photo you see here is from the weekend before last. Now, that was fun.
Posted by Hugh Koontz at 10:16 PM No comments: 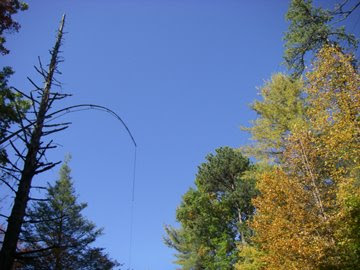 There are few sights in lilfe prettier than a bent and shaking fly rod with a struggling brown trout at the other end, with a background of deep blue sky and fall foliage on the banks.

The brown trout are hitting tiny flies, when your fly can avoid the floating dead leaves. I expect those leaves to be quite a problem from now until, well, Christmas.

But then, it is pretty out there surrounded by mountains as colorful as Grandmother's quilt.
Posted by Hugh Koontz at 8:55 PM No comments: 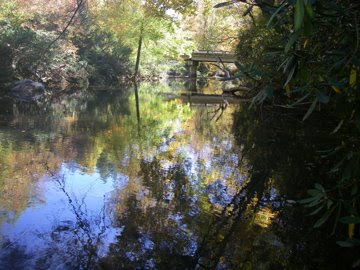 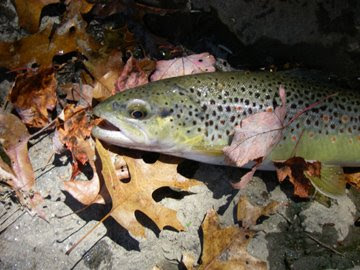 You know it's fall when your dry fly keeps hanging up on floating leaves and brown trout attack with a vengeance as the fly nonchalantly bounces on the river's surface.
The colors bouncing off the mirror-smooth water are blinding and mesmerizing. I almost forgot to pay attention and look for rise rings to cast to. Almost.
I found a seam next to the bank, sheltered by overhanging rhododendron hugging blocks of granite. The water tumbled over some boulders, splashed like kids at camp and settled down to a smooth, clear pool full of mystery.
I put the little Adams midge a little ahead of where the last rise was. I let the tiny fly float and float and ... spash ... there it goes across the pool, then straight at me and then away again to the other side. The rod shuddered. I tightened my grip.
It was almost too easy.
But I had paid my dues earlier in the day, casting downstream to let the fly reach the trout's feeding lane before he spotted my line and swam away. I let out many feet of line, more and more as the fly sailed down the North Fork of the French Broad River. I got one hit and lost him. I wasted a lot of valuable fishing time (VFT) before heading upstream. I could see the feeding trout from where I was hunkered under the branches.
It was supposed to be the best day of the month for fishing, especially between 11:30 and 2 p.m.
And, you know what? It was. The forecasters hit it perfectly Monday and Tuesday.
Fall fishing at its best. With the exception of one rainbow trout, all the fish I landed were browns during the three-day period.
And with their fall colors sparkling gold and red and silver, those trout fit right in with the season.
You know its fall when the fish match their surroundings.

On the way to a trout stream 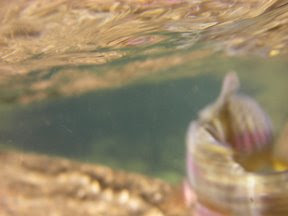 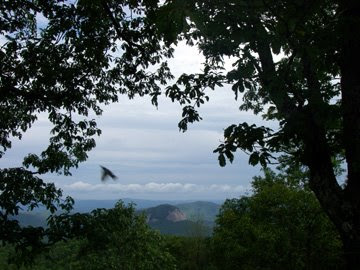 I was really just trying to get a shot of the clouds hanging out over Looking Glass Rock from the Blue Ridge Parkway when this bird flew across my view.

I'd like to say it was an eagle, or at least a hawk, but I cannot be certain since he zipped away quicker than a blink.

I did make it to the stream a little later and managed to land two pretty brown trout, all wild and sparkly with fall color.

And here's an artsy shot of a wiggling rainbow caught in the same creek the week before. Too bad he would not stay still for the camera, but you can tell it was a fish.
Posted by Hugh Koontz at 4:20 PM 2 comments: 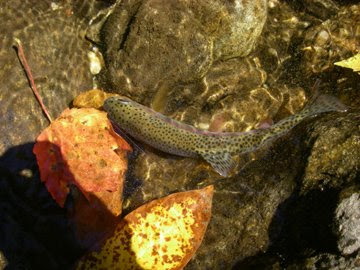 What’s the secret?
The wind italicized the world, bending everything to one side. You could hear it whisper through the dying leaves but it was tough to figure out just what the big secret was. I just hoped it would die enough so I could whip my fly line over the quiet water and perhaps, with luck, actually catch a trout with a dry fly.
It almost never happens. The Baptismal Pool up the street from my cabin is mirror smooth but rough as broken glass to fish. The fish are wild and spooky. A kingfisher’s shadow sends them scurrying for cover under rocks deep in the pool. A sloppy cast scatters them every which way, and they seem to lose interest in eating little bugs on the surface for at least an hour.
I learned you have to be stealthly, to bend over or kneel when casting and to blend in with the surrounding rock and rhododendron if you want to catch one of these jewels.
The pool is pretty popular. People leave their Mountain Dew and smashed Bud Light cans along its banks. There’s the remnant of someone’s camp … a torn blue trap. There’s some half-burned wood from one of the bushes the campers sawed down. I wonder if they knew that wood produced poison smoke.
The pool, despite the small amount of litter, has been used for baptisms, weddings and as a wonderful place to cool off in the hot days of July, though the swing rope is now history after a winter storm tore down the tree it was tied to.
It’s a pretty spot. And way too close to the road.
But catching trout is the only part I am interested in. For six years, I have tried to master this little bit of heaven (hey, people get married and baptized here), only to be turned away fishless time and again.
Last week I had a little better luck, though I still left skunked.
I tied on a small dry fly and then added some fine tippet…about 18 inches or so. To that I tied a really tiny nymph. This just might do the trick, I thought.
So, I hunkered down at the head of the pool, next to the rushing water tumbling over smooth rocks. I stayed low, so the trout would not spook, and flipped the rig into the riffles, letting the flies drift downstream close to the steep bank.
I pulled out more line with each cast, let the flies swing around until the line was straight and held my breath.
Come on, trout. I have only a few minutes to fool with you. I promised Mrs. Koontz I would take her to the store and dinner at 3 p.m.
The sun stabbed through the hemlocks like prongs of a huge golden fork. My mind drifted ….
Then the rod shuddered, and there was a splash where my fly should have been. Dang. Missed him. Running out of time, I managed to miss three more trout before putting them all down for the day.
And as I left, I listened for the secret I wanted to hear.
But all I heard was the wind whispering through dying leaves.

Posted by Hugh Koontz at 3:31 PM No comments: 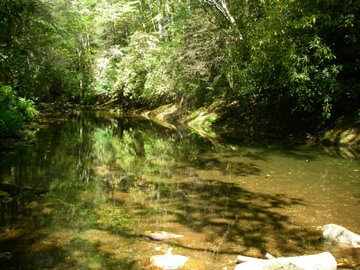 It used to be known as the swimming hole, but a storm broke the tree holding the swing rope last year and there is no way to dive into the middle where there used to be a lot of deep, cold water.

I have seen teenagers laughing and diving into it, couples getting married by it and new members of a Christian church getting baptized in it.

The one thing, though, that I would really like to see is a fly fisher (me) pulling in a huge, wary trout from it.

It is a tough pool to fish. Its surface is mirrow-smooth; if you sneeze, ripples spread over its surface where the fish spook easily. You have to use long, light tippets and tiny flies, for these fish mostly are picky eaters.

I have caught some, but only in the rougher water at the head. Never in the middle, though you can see the trout from the high bank. They sorta mock you.

I have, however, discovered a little secret. I tied on dry fly, with a long, fine tippet about 18 inches around the bend in the hook and fished a itty bitty wet fly at the end. I figured two flies would be better than one on these difficult trout.

It did. I hooked and broke off three and then ran out of time. I was supposed to take Mrs. Koontz into town at 3 for dinner.

So, this Sunday, fish, watch out.
Posted by Hugh Koontz at 9:39 PM No comments: