She put the plate on the table and said, "I didn’t make this. She did." Then, the waitress disappeared into the kitchen where presumedly She was preparing BP lunch specials like the one in front of me.
My plate sorta resembled a Louisiana beach, with a thick layer of goo covering most of it and flanked by some boiled bacon flavored with green beans. There was a pretty good biscuit off to the side.
This fishing trip is not getting off to a good start, I thought. I had arrived late at the South Holston River. First, the water was too high to fish downstream. I slipped on the bank, twisting my knee. I forgot to line up a place to sleep and I was driving around lost while trying to remember where the best spots were and how to get to them.
Then, it was dark as a scary movie.
I had violated my No. 1 rule: Never leave fish to find fish. The prior weekend I had spent a couple of splendid afternoons at home catching rainbows and brown with little black ant flies. Though I could not see the fly, the trout could. I’d watch for the splash or the twitch in the line, then set the hook. I lost count of how many.
Fourth of July weekend was supposed to be special.
While my first day was a bust, Monday dawned full of hope. By mid-morning, I was catching trout on a dry fly and again I lost count. This was more like it. I fished mostly sulphur dries but also used a soft-hackle wet and some nymphs.
The spin fishermen downstream were reeling in lots of trout and taking heavy stringers to the house before returning for more. At the South Holston Fly Shop, I learned later that these good ole boys are infamous for flouting the state fishing regulations. They probably have a refrigerator full of freezer-burnt fish that a skinny cat wouldn’t eat.
Things began to get better, though. I found a campsite, bought a new fly rod and sampled some fine cuisine at the Hickory Tree Store where the chili dogs are prepared lovingly by the ladies running the store.
As the sun began to dip, the river sparkled with a red-purple glow. Mayflies glittered in the air. Trout began to rise all around as the water, which had been rushing from the dam all day, began to drop. I started with a yellow dry fly.
The trout kept on rising and I kept on fishing.
I did no catching.
When I looked closely at the water, there was an armada of spent-winged mayflies doing their version of the Dead-Man’s Float. These were the worn-out spinner flies, of which I had none in the fly box. Dang.
That night I slept under the stars; there was no need for a tent. Holiday fireworks and a big dog’s woofs from across the road lulled me to sleep.
The sun woke me early, so I achingly struggled out of the sleeping bag. The sky was a brilliant blue with a few horse tails for clouds. I was in the water in an hour.
I caught a bunch of fish, rested in the early afternoon at the campsite and headed back to the water for the evening hatch, for which I was fully armed with spinner flies.
And, you know what? Those spinners did not show up. Calmly sailing by on the surface were sulphur duns, with their upright wings in the air like sails, so I changed flies a couple of times. I could hear a group of fly fishers nearby, their voices rising with the mist through a heavy fog that settled over the river. One guy was into a big trout. Another guy fell in.
The sun was almost gone when I felt the tug … a hard tug. All my fly line disappeared as the brown trout took off, shaking its head like a big dog with a bone it won’t let go of.
Wow, those South Holston browns are strong. I had already broken off one huge one, so I wisely let this one run.
My reel was ringing, adding to the celebratory Fourth of July racket that never ceased that weekend. Holding the trout gently before releasing him, I marveled at the fiery colors awash with the sunset’s fading fuchsia. The water shimmered.
What a fine way to celebrate the Fourth of July, even if I had to leave fish to find fish.
The next weekend I was back on the home waters catching late-afternoon rainbows with tiny ant flies.
Ain’t it great to be alive and living in America?
Posted by Hugh Koontz at 9:44 PM 5 comments:

Fly fishing on the Fourth on the South Holston River, Tenn. 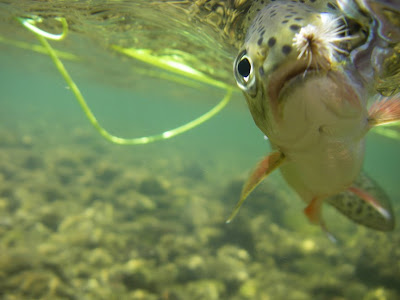 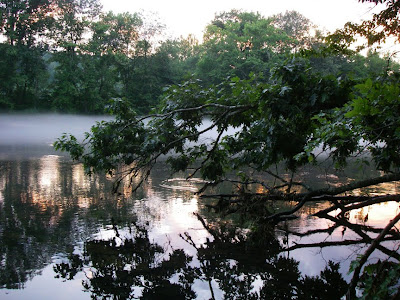 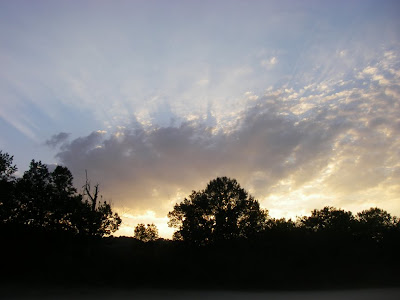 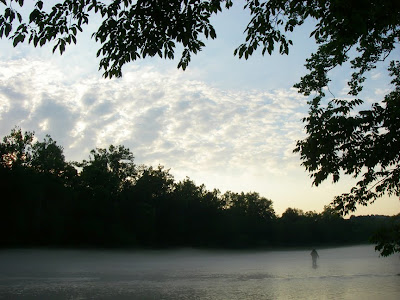 Labels: Fishing the South Holston on the 4th

Getting antsy with summer fly fishing 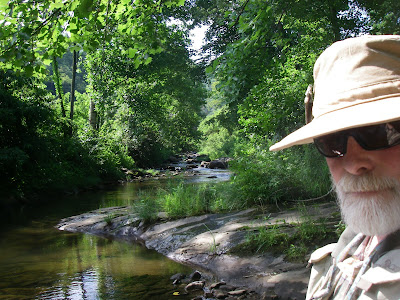 Summer trout fishing creeps slowly like a relentless picnic-raiding army of ants. It’s a respite from the wild dances of April and May.
I love spring fly fishing, of course, for that is when the mayflies and stoneflies fill the afternoon and evening air to entice wary trout out of their winter sluggishness to get in line for the big bug buffet.
Boy, I had some awesome days in May tossing little yellow sallies and light cahills, which often didn’t have time to get used to the cold water before one of those voracious rainbow trout abruptly ended its peaceful ride. In the late afternoon light, the mayflies sparkled and glittered like jewelry.
At the right time, the hookups were almost non-stop. I’d have to drag myself from the water.
Waiting until it was almost dark as tar can bring out some big surprises. Huge fish come out of nowhere to hit the fly with startling violence and after he breaks my line, I stand with shaking knees wondering where that one came from and where was it a couple of months ago?
I mark such places, vowing to return to finish what was only begun.
With summer I can pause to catch my breath. The water is much lower, the mayfly hatches are less frequent, and the air is thick as warm syrup. The fishing, in a word, is tougher.
But you recall those picnic raiders, the ants? Trout love these little guys. Beetles and grasshoppers also drive trout insane with the munchies on the hot summer days, and these flies will work when nothing else in the fly box will. Sometimes I cut the hackle from the bottom of these flies so they float a little lower in the water, even though that makes it almost impossible to see. Ant flies work on top, in the surface film and tossing around under the water.
My favorite home water was frustrating me last week. Nothing worked. I wasn’t certain there were even any fish left there. The water was ankle deep and threatening to go lower if rain didn’t come soon.
I kept changing flies.
I put on a beetle fly and fished it in the shallow water downstream. Like the ant flies, I could hardly see the thing on the water. I just kept a careful watch for splashes, and thern set the hook.
I switched flies when the beetle began to look well-chewed and digested. A big black ant made a fine substitute, though I still couldn’t see the thing on the water.
I fished a good portion downstream, finding a puddle pool here and there, holding the rod high while hoping I didn’t spook the trout.
The water was so low I was spotting trout by the waves they knuckled the surface with when they moved . There were a few rises, but nothing deliberate or regular.
But that little ant kept busy. I missed a bunch, hooked quite a few before losing them and landed a few nice rainbows before I just got tired a catching fish and quit.
One rainbow shot out of the water like a little silver and red rocket about three feet into the air; what a show-off, I thought.
It had been a fine day for fly fishing. Why press it? This is summer fishing, slow and easy.
Well, perhaps not easy but certainly relentless ... like ants.
Posted by Hugh Koontz at 9:11 PM 4 comments: