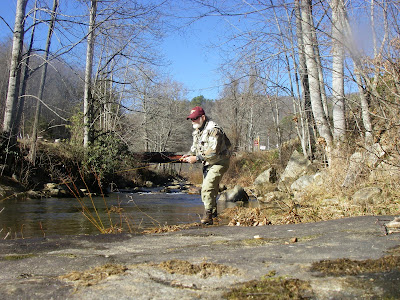 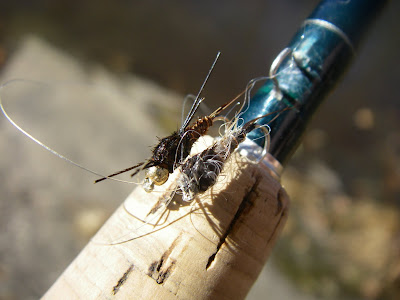 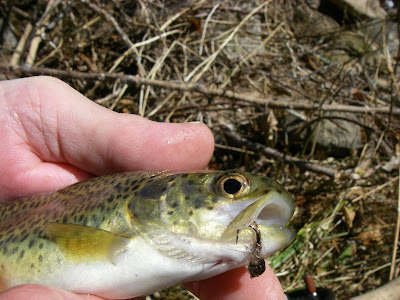 A frightened pile of leaves swirled back and forth on the highway like a small herd of squirrels dodging cars. It was a cold wind. I'd be jumping around, too, trying to stay warm.

For the past month we have been trying to dodge snowstorms and winter rains. But the cracks in the clouds do appear. From time to time, the winter sun peeks out from behind a gray curtain of clouds to warm the air and the water just enough to get the trout moving.

That happened last Monday. I could have spent that nice 45- 50-degree day running errands and taking trash to the landfill. I considered that only briefly, saying to myself at last that it all could wait until next Monday even though in the back of my mind I just knew it was going to be too cold and icy and perhaps even too snowy to make that trip to the dump.

The overflowing truck can stand it one more week.

Well, you guessed it. The forecast for Monday now calls for more snow in the half-foot range and bitter cold and scary road ice.

But last Monday is still fresh in my mind. Sunday night I had tied hare's ear and a pheasant tail nymphs, with the BHPT for a dropper to give a little weight. On Monday, a playful sun was out, and the air was mild. It was great to be alive.

Wild rose and blackberry claws ripped my shirt on the way down the bank but drew little blood. And on the second cast I felt that shudder run through the rod to my arm. I turned to see if Mrs. Koontz was still ogling from high on the bank, but she had missed the show and was in the cabin.

I caught eight or nine within an hour, all lively rainbows glistening in the sun. Almost all hit the hare's ear nymph, but at least one finicky fish hit the pheasant tail fly.

I tried a few casts upstream with no luck. It was time to stalk that brown downstream at the church road bridge that I had spotted feeding near the east bank last month. I could make him out pretty well from high above the river while on the bridge. This time, though, I could not find him. Perhaps he's hunkered down under that undercut bank?

I took one last look as I walked back to the Troutmobile. As soon as I leaned over to look underneath the bridge, something flashed in the bright sunlight and shot like a rocket upstream.

Now, I at least knew he was still there.

If I only had some idea of where.

I fought through the brambles and doghobble to a narrow perch from which I could rollcast my flies across the water and let them swing downstream to entice hungry trout. No luck.

I figured to return soon for that shy brown.

I had enough time for one more spot. The fire station pool always has fish and mostly they like to hit my flies, though not all the time. Earlier in the day I got but one strike. And missed it.

So, back for one more try while the sun slowly dipped behind the mountain. The water had a silvery-rose tint that was as mesmerizing as precious jewels in motion. Wrapped in the beauty of an unnaturally mild winter day, I was lost in thought. Sunlight was waning.

After an afternoon of catching 10- to 12-inch trout, a surprising shock wave shook through my arm. I almost lost the rod as the fish tugged like a dog with a bone. I let him have some line so the 6X tippet wouldn't snap.

The fish ran, then I stripped him in, then he ran again before I landed him. Pulling out the camera, I tried to focus while the camera kept turning off. Battery dead.

So, I let the 18-incher slip back into the rose-tinted water, vowing to return with recharged battery the next week. Then, I'll catch that brown up the street, too.

So much for those plans. I'll be fortunate if I can cross an ice-covered road to the river. I know for certain there will be no trips to the landfill and I guess there's something to be said for that too.

I can tie flies indoors.

I hear the wind already has upped its ferocity.