Car dies in the wild 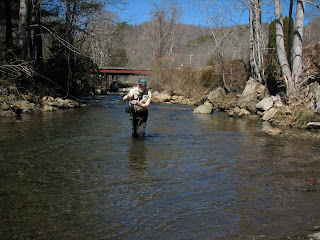 It was not the best weekend of trout fishing. Most of the time, I spent on the side of dirt roads with a broken down car. The first time, I was near a house, used the phone and got Mrs. Koontz to pick me up. Two neighbors took part of the car apart and got it to running so I could make it to the cabin. We spent an hour looking for a little metal piece Yank, a transplant from Canada with a thick accent, dropped as the sun gently set over the hills. It began to get cold, drizzly and threatening snow.
The next day I bought a new distributor rotor button, put it in with the help of Rodney, another neighbor who kept me entertained by talking about a 26-inch rainbow he caught near my cabin and a 31-inch brown his dad caught nearby.
Well, the car made it back into the forest as I headed back to work, then died about a gazillion miles from nowhere, and nowhere near a phone. I hitched to the hatcher, called the tow truck and waited, and froze, for 5 and a half hours.
And the nice Wildlife officer told me about the 30-inch brown trout HE caught just up the road.
Hey, stop it. I left the rod in the car, about a gazillion miles away.
I got the car to the shop, the took all day before looking at it, and then told me the bad news. It was not dead, but it was severely injured. At least 3 big bills.
The next day while I waited I fished. At last, I was near trout with all my stuff. The trout were sipping bugs off the surface too!
For two hours, I made up for all the frustration of the previous three days. My first three casts to the home waters mirror pool produced violent splashes and equally violent line breaks. I lost two flies within 30 seconds. These trout were HUGE.
I did begin to land some, though, including one of the prettiest brown trout I have ever seen and a couple of scarlet-cheeked rainbows.
I lost count of the smaller fish. Boy, was that fun.
Sorta softened the broken car blues.
Posted by Hugh Koontz at 9:48 PM