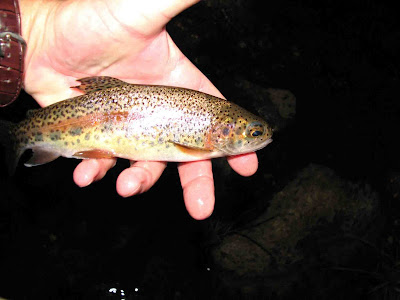 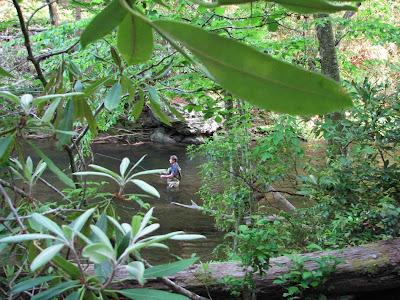 By the time I got to the cabin, picked up the camera and pulled the new waders on, rain was tap-dancing on the car roof. I knew it would blow over, so I settled back to read a little. It was only about 4 p.m. Other than the thoughtless rainstorm, it was a nice spring day. I was ready for some serious lip-rippin' trout fishing.

Then I fell asleep to the rooftop drone.

The rain stopped about an hour later. I yawned, got out and rigged up the rod. I then hid under the bridge because it had started raining again. Still, I caught that brown trout that hangs out near the bridge up the street.

It cleared for good and the light cahills came off like a snow flurry about 7. I caught a bunch of nice browns, and one hatchery rainbow, during the short stretch.

I hit the North Mills River Monday, en route to pay bills and buy groceries and stuff, and fished about 45 minutes. Nothing much happening during the mid-afternoon.

Hit the home stretch in the evening and tore them up, again with Light Cahills on top.

One more time Tuesday morning, I tied on a little cahill dry fly and left the lawnmower in the yard, with another healthy half of a yard still to be cut.

I missed two fish right off, but then nailed a little wild trout...or he nailed me by surprise...before calling it a day and getting ready for work.

I shouda called in sick.
I had managed to fish the Davidson River and North Fork of the French Broad, the North Mills River and Courthouse Creek over the weekend, all sandwiched between trips to the store, the telephone company and the fly shop.
What a weekend.
Posted by Hugh Koontz at 10:12 PM