The Hatch - Bug buffet in May 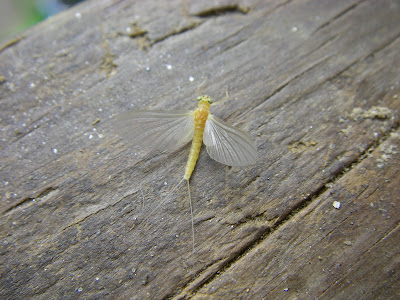 They call it the Mother’s Day Hatch out West also. I read about the hatch in Montana that really lights up those trout on those big rivers during May when the air fills like a golden bug blizzard. It’s one of those magic moments on the water when fooling fish with a fly becomes almost too easy.
We called the yellow stonefly hatch on the Davidson River "The Mother’s Day Hatch" because we discovered the marvel on, you guessed it, Mother’s Day about 20 years ago. It began around 8 and lasted until it was too dark to see the fly. We could almost touch the madly feeding trout that splashed next to us in the rushing water.
And it’s that time again.
The flies are coming off the water on the Davidson, the French Broad and everywhere else there’s cold water and trout. Often, those hatches explode in the waning light when it’s least expected, like after you’ve been on the water all afternoon with nothing to show for it other than wet boots. One must be patient.
I spent a good portion of Sunday afternoon chasing rising trout in the Davidson, missing quick little wild rainbows in Looking Glass Creek and in general just getting a plain old-fashioned skunking everywhere else.
The water tumbled over Looking Glass Falls like a glistening crystal curtain. I paused for a second, thinking perhaps I should give that plunge pool a stab with a heavily-weighted wooly-bugger. But the crowd was too much. I wasn’t exactly looking for company.
The sun was bright and warm. Sudsy clouds fringed a perfect bluebird sky. The wind was a mere whisper tickling the laurel.
Fishing Looking Glass Creek, though, gives me the feeling of vulnerability. The water is so close to the highway I sometimes expect passersby to toss soda cans from car windows at me just for fun. It could happen. I guess I could throw fish at them in retaliation.
I tagged a couple wild rainbows with a cream-colored caddis fly, but both were too quick. Almost 6 o’clock and no fish.
Leaving Looking Glass and the Davidson behind, I hit the Blue Ridge Parkway. I had a few special creeks, places where I can get away with drive-by casting, that hold a few special trout. They are not easy to fool.
Approaching 7 p.m., there still was no hatch. I decided then that I would go to the cabin … after one more stop.
My fire station pool almost always saves the day. There are a lot of stockers in there and a few browns. On Sunday I discovered the really huge brown trout that lurks under overhanging tree limbs and I almost missed it entirely.
Light was fading like old blue jeans. I could barely make out the fly, and then the water exploded like an old tire tossed into the river.
All about my face little bugs danced aerial jigs. They looked as if they were being shot from little Polaris submarines.
And the trout acted like frisky puppies scrambling for food. There’s no line at this bug buffet.
The biggest fish took the fly, ran upstream and then turned back as if it forgot something. I stripped line like mad, then let the fish run while the reel clicked like crickets on meth.
I had caught a dozen so far, and lost one biggie, from my spot below the bridge.
The fish began to tire. I brought it close and held it with my left hand while fumbling for the camera. The brown sagged heavily in my hand, its hooked jaws moving like it was cussing me out.
Or perhaps just laughing that quiet trout laugh.
The fish snapped the line. The hatch was over. I could go home now.
I’m glad they have this much fun out West too.
Posted by Hugh Koontz at 9:34 PM