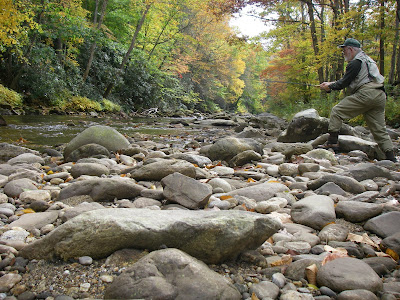 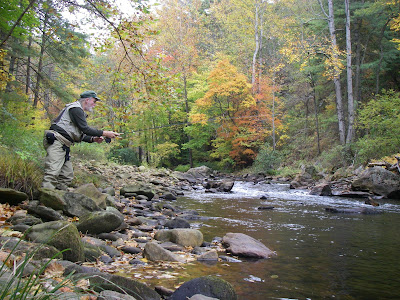 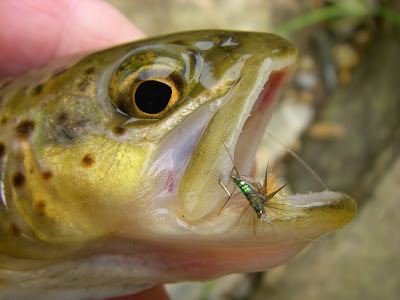 Fall in the mountain of western North Carolina is a little like driving around the inside of a brightly-lit Christmas tree, with a rainbow shower pouring through the branches drenching everything. It's one of my favorite seasons.

The perfectly blue sky was marred by only a few feathers of cloud. The sun was bright. The air was sweet and warm.

For the record, I was skunked on the East Fork of the French Broad River two weekends ago, humiliated by gently rising trout sipping God-only-knows what type of flies. They certainly were not interested in anything I had to offer, which included hoppers, midges and parachute cahills and a few streamers too.

It can be demoralizing. You're standing on the edge of a mirrow-smooth pool reflecting the flame-red and gold of maples and beech, and the water looks as if it were raining. Trout are feeding everywhere. The rise rings pop up and disappear.

So, you tie on a fly. You pick out a spot and you let loose with a perfect cast that lands feather soft on the water's surface, allowing the fly to float for a few seconds before ...

Nothing happens. The trout continue to feed on everything in the water except your fly. They splash and swirl and swallow every bug in sight ... except the one fly that's not real.

This happened on the East Fork of the FB, on the Davidson River near Looking Glass Creek and once more with feeling on the Pigeon River.

It's one thing to get skunked when there is nothing happening and quite another experience when the fish are feeding all around and the water looks like it's been peppered by birdshot.

I tied a little sparkly midge, about a size 20, and cast to a little channel next to some rock. It was late Monday and I had not caught anything but leaves. I watched the little fly bounce jauntily along before disappearing with a violent splash.

The spell was broken. The remorseless drought came to a splashy end and I had the fist trout of the day, indeed of the month, struggling at the end of my line.

I got another brown while floating the fly downstream, mending the fly line every few seconds so it wouldn't drag it like a wiggling snake and scare the fish. I missed two or three this way, mostly because I had so much line loose in my hands trying to get a long, quiet drift to where the fish were feeding.

I drove home through a tunnel rich in fall color, with gold and crimson light pouring softly through the trees like honey. Everything glittered.

Fall's one of my favorite seasons.