Fly fishing in the snow 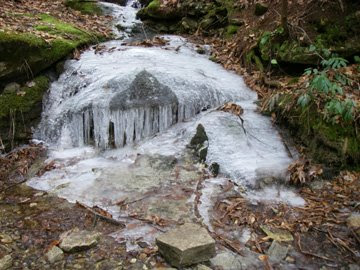 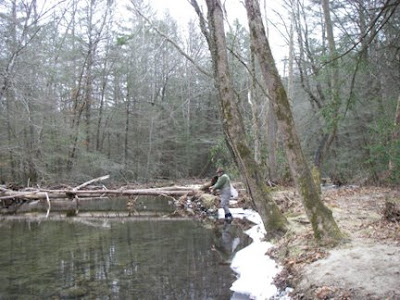 Yeah, I know. It was cold. The trail by the river was covered with a frosting of thick ice and the banks were fringed with snow.
Actually, the frigid temps of the early morning eased off in the afternoon, though the snow continued to fall like tiny feathers all day.
Most importantly, the trout were hitting on top. I nailed a couple of nice browns, one over 20 inches, in the Davidson River on Monday.
I slipped him up on the icy bank for just a second, then he popped the hook and skipped back into "The Trough" just below the state hatchery. He was a brilliant gold and silver.
Fellow downstream said it was "a gentleman fish" because I did not have to get my hands wet releasing him.
Hmmmmmm...a gentleman's fish?
Posted by Hugh Koontz at 10:47 PM