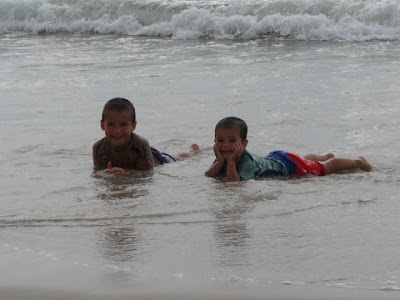 We finally got around to cooking the pie with those wild blueberries Mrs. Koontz and I picked the previous Monday. I was surprised they were still there in the fridge. Anyhow, we picked through the berries, added a little less than half cup of sugar (coulda used more), a cup of flour or thereabouts, some cinnamon and some nutmeg. We used the double pie shells made with shortening, not lard. Seemed like it cooked for more than an hour but that's not right...I think you bake it 35 minutes, then remove the aluminum so the crust on top browns nicely.
We topped it off with whipped cream, but the consensus was it would have been better with vanilla ice cream.
I hope there are some berries left in the patch when I get back up there.
The finished product disappeared before I could get a photo. Perhaps next time...
The photo shown here is of my two grandsons, Patrick and Spencer, at Virginia Beach. They love blueberry pie also.
Posted by Hugh Koontz at 9:57 PM