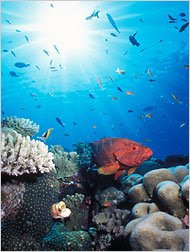 I would love to catch some of these pretty fish on a fly, but the mountain streams of North Carolina are just too far away.

By HENRY FOUNTAIN
Published: July 1, 2008
In 2004, Australia banned fishing in about a third of the Great Barrier Reef Marine Park by creating a patchwork of “no-take” reserves covering about 45,000 square miles. The move was opposed by many sport and commercial fishermen, fearful that their hobbies and livelihoods were threatened.

Get Science News From The New York Times »

They needn’t have worried, according to a study by Garry R. Russ of James Cook University, Alistair J. Cheal of the Australian Institute of Marine Science, and others. Writing in Current Biology, they report that numbers of coral trout, the group of species most coveted by both sport and commercial fishermen, increased rapidly after the reserves were created.
Using underwater imaging, the researchers conducted surveys of protected and unprotected areas before the plan went into effect and about two years later.
They found that there was no significant change in the unprotected areas, but in the no-take reserves the density of coral trout increased by as much as 60 percent or more.
The researchers say that the increased numbers of fish mean that more larvae will be produced. And since larvae can be transported by currents to neighboring unprotected areas, that bodes well for the two-thirds of the barrier reef where fishing is still allowed.
Posted by Hugh Koontz at 12:24 PM